EXCELLING UNDER A BOSSY BOSS

EXCELLING UNDER A BOSSY BOSS

As an employee, there would be that person who will oversee the affairs of your department or the entire organization either as a direct superior or one in the management staff cadre. This person is usually refer to as the boss.

Generically, a boss is an individual who supervises, monitors and controls the affairs of an organization with the aim of achieving the set goals. However, a bossy boss, is one who prefers to dictate, order employees around, without a care how they feel. Employees are sometimes unfortunate to be under the tutelage of a difficult boss who gives them mares and never sees anything good in them. 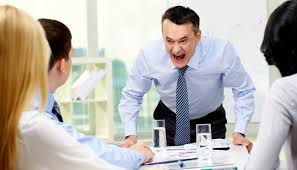 Consequently, employees can take up measures to savage the circumstances confronting them on the job over time through their boss. For this to be achieved, the type of boss need to be known so as to help the employee developing ways of tackling the issues that may occur.

When there is a particular project to be embarked upon, endeavour to carry out a SWOT analysis of the project prior to its commencement and send it to him before time, with or without him asking. This will help keep him on check and make him realised you have communicated it to him even when the outcome seem negative.

In this kind of circumstance, ensure to let the boss know the pitfall inherent in the project if it lacks the resources required. Take measures like giving him an insight of a similar company that has failed as a result of putting in the approach he’s about using and make him know what it can take to be a market leader or scale through a tough competitive environment.

This kind of environment is not a healthy one for your career development as an employee and as such you need find ways of changing your job and forge ahead. Although, in the waiting time for a new job, the situation can be managed to some extent by ensuring that you maximise your time when he is around and this can be achieved if only you are pro-active except for unforeseen events that may occur.

In this kind of situation, you need to be very meticulous in handling issues. When a circumstance occur for which a solution is needed and your boss comes with the opinion someone has given him and you know it will not work, kindly adopt your own approach to the  circumstance although you must be very sure that it will work out. In the short run your boss might take the credit but over time he will respect you and always weigh his options afterwards.

The list might be endless, but in this article a few dominant in every working environment were taken into consideration. The basic approach to dealing with the kind of boss you might be faced with, is to first identify who your boss by taking a critical analysis of him and then adopt approaches to handle him for there to be a smooth working relationship.